It has been months since our last posting, but we have been busy.  Our main efforts have been toward a better understanding of the role enslaved African American men of Warren played in the Revolutionary War.  The records of the War are fractured and incomplete — a fire in 1800 destroyed the majority of records at the War Department in DC,  with more destroyed when the British invaded the capitol during War of 1812 — but most were reconstituted and our State Archives have many of their own.  We also have spent time with websites and books including Bob Geake’s From Slaves to Soldiers, Judith Van Buskirk’s Standing in Their Own Light and the DAR’s  downloadable 900 pages on Native and African Americans who served in the Revolutionary War entitled Forgotten Patriots(2008) with Supplement (2012).

Rhode Island didn’t allow black men to join the military until February 14, 1778 (and that only lasted for four months) so it was baffling to see three enslaved Warren men –Hampton Barton, Caesar Cole and Prince Child — show up enlisted in the Spring of 1777.  But the thing is they went into the Continental Army which was desperate for men (enlistment was for a minimum of 3 years vs a few months in the local militias) and so these three African Americans were “enlisted”, likely by their owners, for the 44 pound bounty being offered.  Did these men have a choice?  Likely not, but even the Continental Army might have seemed a better option if it meant they were free men.

We will be marking the 400th anniversary of the first enslaved Africans being brought to Point Comfort Virginia in 1619.  Jeff Davies will be ringing the Baptist Church Bell  for 4 minutes, 1 minute for each one hundred years.   Pat Mues and Sarah Weed along with Pastor Esther Irish, will discuss the slave trade, enslavement and its legacy.

The landing of the first enslaved Africans was one of the most significant events in our country’s history, but is still widely unknown. Originally, the “20 and odd” enslaved Africans onboard the White Lion were never to be brought to the English colonies but rather stay in the Caribbean and South America in the Spanish colonies where slavery was already established. At the time, slavery did not exist in the English Colonies.

The White Lion was in desperate need of rations before making the long journey back to Europe. They landed at Point Comfort seeking to trade the “20 and odd” Africans for provisions. The enslaved persons were skilled farmers, herders, blacksmiths and artisans. Along with their skills, they brought their own culture, language and beliefs that shaped innovations in food production, crop cultivation, music and dance. Despite all the skills and innovations they brought to this new land they would undergo generations of hardship and turmoil. Those first “20 and odd” Africans who landed at Point Comfort marked the beginning of 246 years of slavery in the United States.

Join us at 2:30 to learn more about 1619 and the role of Rhode Island and Warren in the slave trade, who the African Americans enslaved in Warren were, and the part those men, women and children played in the founding of our country.

We all learned that the Statue of Liberty was given to us by France to stand in the harbor of New York City as a beacon of hope to immigrants coming to Ellis Island, right?  Well, the words we all can quote by heart, Emma Lazarus’s poem which ends:  Give me your tired, your poor, your huddled masses yearning to breathe free/  The wretched refuse of your teeming shore.  Send these, the homeless, the tempest-tost to me, I lift my lamp beside the golden door! was not placed at the base of the Statue until 1903, nearly 20 years after the statue’s dedication in 1886. 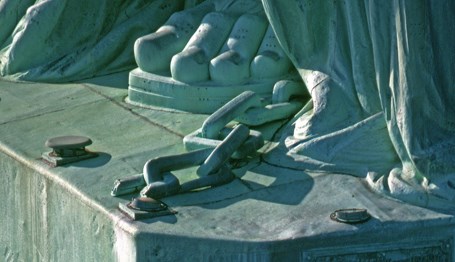 The Statue of Liberty was the idea of Eduardo de Laboulaye, a French political thinker and staunch abolitionist.  And it was meant to celebrate the end of slavery and the victory of the North in the Civil War.  Broken shackles at her foot symbolize that fact.

You can find more on the subject at the National Park Service site you can reach here.

Thursday, June 20th, we dedicated a marker that tells the history of Warren’s involvement in the transatlantic slave trade and the people who were enslaved in Warren.  I will be posting about those people throughout the month, but wanted to begin with the marker.  It has been placed in a prominent location on Water Street facing the sidewalk at the entrance to the Town Wharf.  History tells us the wharf that was here in the 18th century, Collins Wharf, was the launching point for Warren’s first transatlantic slave voyage to Africa on September 24, 1789, two years after such voyages were declared illegal by the Rhode Island General Assembly. 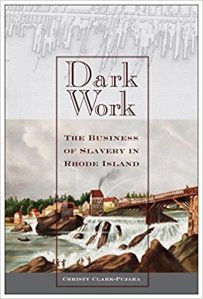 In February of 2016, Christy Clark-Pujara — author of Dark Work: The Business of Slavery in Rhode Island — gave a talk at the John Carter Brown Library at Brown University.  It can be seen in full on Youtube here.  Dr. Clark-Pujara is a great speaker and she gives us insights into what it must have been like to be enslaved that we incorporate in our own presentations. I encourage everyone to take the time to watch this lecture when you can sit back and take it in.

But since I know most folks will not be able to watch and listen to 72 minutes, let me suggest that you go to the last ten, a Q & A session where Christy talks about the importance of plaques, memorials and markers in public places.  Her discussion on that issue is worth at least ten minutes of your time.

The work of the Warren Middle Passage Project, to date, has been focused on providing all the information we can on the involvement of the Town and its residents in the slave trade as well as identifying those African Americans who lived in Warren in the 18th and early 19th century.  (Our future efforts will take us forward from that period to identify people of color who are their descendants.)

Finding people who have been forgotten or erased is crucial to our mission.  Here are names of those men, women and children we have identified so far.  Those with [brackets] arround their last name show the name of their owner, which they may or may not have taken.Those in bold served in the Revolutionary War.  Those in italics were owned by visitors to Warren who moved on after a few years.

For some of these people, we know they retained the name they were given during enslavement because we follow their later history.  For others, who appear to us in Warren Town Council records only on the day of their emancipation, we do not know what name they chose to use once free.  With women, we also must face the fact that their last names often disappear once married.  But we have to work with what we have while remembering these men and women might well have wanted to choose their names for themselves.

Sorry for the last minute announcement, but we were not certain how much space was available at this presentation of “Finding Phebe: Uncovering the History of Enslavement in Warren, RI”.  We can tell you it is worth coming just for the view, because we are presenting at the gorgeous Sailing and Education Center at Roger Williams. Here is a link to an older map of the RWU campus; the Center is #29.  The presentation begins at six and it is free to all. 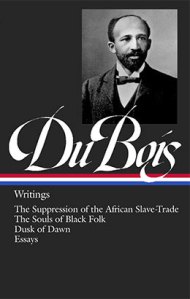 W. E. B. Du Bois, while at Harvard University, wrote his doctoral dissertation: The Suppression of the African Slave-trade to the United States of America  1638-1870.  I had not known about this monograph until I picked up a compendium of his work at the George Hail Library here in Warren.  I also discovered the webdubois.org website site that gives links to the various editions of the work online as well as much of what has been written about it since its publication in 1896.  It is a masterful work, using facts to show how that “suppression” was, until the end, nonexistent.  In the final chapter, he observes the catastrophic result of the failure of the men at the Constitutional Convention to address slavery at the end of the Revolutionary War:  …there was never a time in the history of America when the system [of slavery] had a slighter economic, political, and moral justification than in 1787; and yet with this real, existent, growing evil before their eyes, a bargain largely of dollars and cents was allowed to open the highway that led straight to the Civil War.

Along with the nearly 200-page text of this piece, Dr. Du Bois also offers an impressive

list of appendices.  Appendix C includes a list of American vessels carrying Africans into slavery after the trade was “outlawed” in 1808; it goes on for many pages.

You can also see much more of Du Bois’ writings and correspondence via Credo at UMass Amherst.  Born in Massachusetts in 1868 (just 3 years after the ratification of the 13th Amendment), he moved to Ghana late in life and died there at the age of 95, on the eve of the historic March on Washington in 1963.